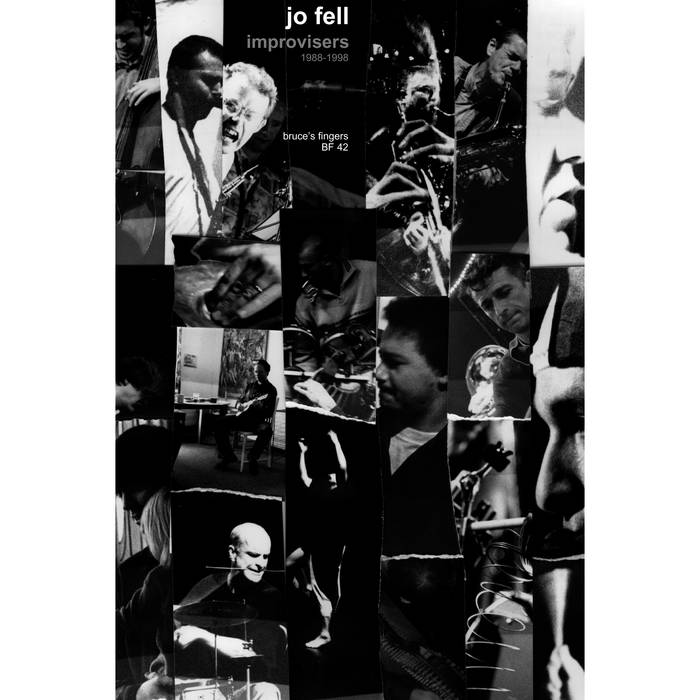 "Jo Fell's collection of photos has many things to recommend it. For instance, it's nicely idiosyncratic. There's no attempt to be representative of something or other. Avoiding the more institutional LMC/Red Rose aspects of the London scene, it covers an interesting, somewhat unexpected, range of players. In fact, it is distinctly non-metropolitan. The important thing, of course, is the way Jo Fell looks at things. There are none of those nostril invading close-ups which photographers usually o.d. on; often there's much more than people in these pictures. But I can't catalogue the book's many virtues - this is already too wordy - you must look at it." DEREK BAILEY

"Jo's work is impressive as it mainly sidesteps the "artiness" which plagues many, if not most "creative music" photos; presenting instead an aesthetically distinct, in-the-moment impression very much in keeping with the spirit of the music." MILO FINE

"Quite apart from its artistic quality, this book also offer the chance to glimpse the physical appearance of a group of musicians the majority of whom are unjustly shirked by 'the media'." Gustave Cerutti IMPROJAZZ

"The booklet, like most of the fiercely independent scene that it records, is a tribute to Jo Fell's commitment to the music and the musicians who make it." Armorel Weston MUSICIAN

"Jo Fell's 34 page book of photographs is a welcome addition to the catalogue. As Derek Bailey notes in his foreword, its selection of musicians is, 'distinctly non-metropolitan' and her style is 'nicely idiosyncratic'. She favours a non-intrusive approach when tracking down these shadowy figures found, she says, 'skulking in semi-darkness'. The results can be pleasingly oblique. They can also make subtle revelations, as in the alignment of hand and ear that frames guitarist John Russell's introspection, or her voluble image of Trevor Watts playing alto at a memorial service for John Stevens." Julian Cowley THE WIRE

"These snaps are candid, un-posed, grainy, dynamic, and powerfully communicate the personal muse-in-action that makes our form so pure and unblemished from conscription to expectation. Fell captures the tenuous catch-as-catch-can performance spaces, the athletic movement one finds with free-playing's galaxies of extended technique, the hands-everywhere and every breath means everything-ness of some of the form's most interesting, as well as many less-known, comrades. Some photographs capture a moment with crystalline clarity, while others force the eye to hunt and resolve their visual mystery. The darkness and solitude, determination, joy and struggle I find here mean much, almost as though this collection were collated as a present for me. In his foreword, Derek Bailey says it best, 'I can't catalogue the book's many virtues - this is already too wordy - you must look at it.' You look at it." Bret Hart THE UNHEARD MUSIC

"Well worth owning... all the photographs are highly distinctive. Odd angles (Mick Beck's fingers on his saxophone keys, oddly reminiscent of Charlie Parker), semi-darkness (a great shot of violinist Phil Wachsmann), double exposure (Derek Bailey in a truly cosmic shot), even reflections (Paul Buckton, in a marvelously constructed frame), are all part of Fell's arsenal, resulting in pictures that, like much of the music her subjects produce, provoke new reactions on each viewing. Hopefully, this will be the first in a series of books documenting Fell's work." Larry Nai CADENCE

"New music calls for new photographic thinking, however, and that's what Jo Fell presents in this short volume of 34 high-quality reproductions. Using only available light and non-intrusive techniques, Fell depicts a cross section of British improvisers in performance from 1988 to 1998. Along the way, she makes it a point to try to capture the creative process and the intersection of performer and instrument itself, rather than creating strict portraits of the players in these mostly black and white shots. Thus saxophonist Mick Beck is rendered as a giant hand filling the frame pressing on different keys. In the shadows, mouth open, hands on his hips, singer Koichi Makigami resembles an Inuit sculpture. In one color photo bassist Simon H. Fell's upper body seems to be made of Plasticine as it's captured in the act of movement; and one stark shot of violinist Phil Wachsmann emphasizes the illumination on his fiddle, his bow and his bald pate. Fell isn't the only photographer working this way of course. Toronto's Susan O'Connor has also built up an impressive inventory of available-light performance photos; and obviously there are others. Still as Mao Tse-tung once stated, let a thousand flowers bloom. Let many photographers capture improvised music at its most free and preserve it as Fell has done. Certainly anyone interested in the look and feel of so-called BritImprov during that crucial decade would be wise to investigate her book." Ken Waxman JAZZ WEEKLY

"Among those pictured are Derek Bailey, Steve Buckley, Alan Tomlinson, Trevor Watts and many more. For the pictures, a caption identifies personnel, date and location. No other text suggests anything for the reader. Derek Bailey sees this lack of opinionated representation as an asset to the book in the foreword. Jo Fell's introduction includes technical data on the shots. She works without a flash and at somewhat of a distance to avoid intrusion. The effect still captures personality and action in her well-composed pictures. ****" Tom Schulte OUTSIGHT

Bandcamp Daily  your guide to the world of Bandcamp